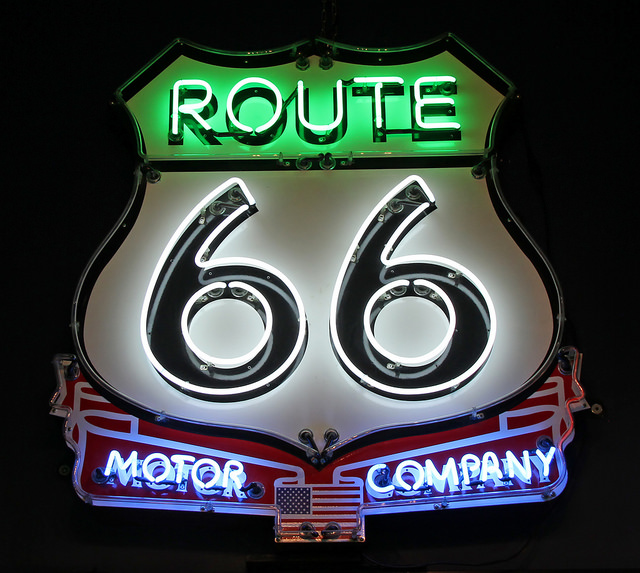 Route 66 has long been deemed the ultimate all American road trip. The 2400-mile ‘Glory Road’ spans America from Los Angeles to Chicago and has inspired many authors, songwriters and directors, capturing the imagination of many. Though officially decommissioned in 1984, due to new and faster routes, it has been forever ingrained in history as one of the greatest routes of all time. Its rich history and breathtaking country vistas make this route ever popular with nostalgic travellers. If you’re looking for an all-American experience, look no further and “get your kicks on Route 66”.

The attractions on Route 66 are endless and all preserve a special time in America’s past. From the Dixie Trucker stop to The Blue Swallow Hotel, each site has a special charm that keeps driving travellers to their doorstep. Here is a rundown of some must-see stops of Historic Route 66, so that you don’t miss a thing while you’re riding, hood-down and hands up.

You can follow in Elvis’s footsteps and take a hike around the Meteor Crater in Arizona. The meteor crashed there around 50,000 years ago leaving an out-of-this-world crater nearly a mile wide (half the size of a football field).

At the El Morro National Monument in New Mexico you can bear witness to the travellers from over seven centuries before you. The huge, 200-foot tall sandstone Questa are covered in the names of those who passed before you and hold carvings of Native American petroglyphs.

The Blue Swallow Motel in Tucumcari, New Mexico provides the perfect spot to take an overnight rest. Listen to the buzz of their famed neon sign and talk to fellow travellers in their cosy courtyard. Just over the road is the Odeon Theatre. Open since 1936, it’s famed for its authentic date-night appeal.

The Blue Whale pond in Catoosa provides the perfect spot to cool down in landlocked Oklahoma. You can fling yourself off the large whale’s tail into the cool swimming pond and peek through his blowholes at people enjoying the Route 66 icon.

If love to revel in a rebel’s story, visit the Meramec Caverns in Stanton, Missouri. The cave system provided refuge for legendary outlaw Jesse James but apart from it’s sordid past, the 6000 caves that dot the Missouri limestone bedrock are a spectacular natural attraction that have lured travellers since 1935.

By the time you get to Illinois your stomach will be grumbling and your eyes beginning to droop along with your petrol gauge; stopping in to The Dixie will solve all your problems. The Dixie is the oldest truckers stop on Route 66 and in the 70 years its been operating it has been closed only one day. The old Dixie will provide weary travellers with food, fuel and things to reminisce over in the museum full of Route 66 memorabilia.

It is widely recommended to hit this Route up in a hired soft-top or American classic to maximise all that the ‘Mother Road’ has to offer.

At the time of writing we have plenty of RVs that you can take along this historical route, so click here to make your booking and get ready to get your kicks!